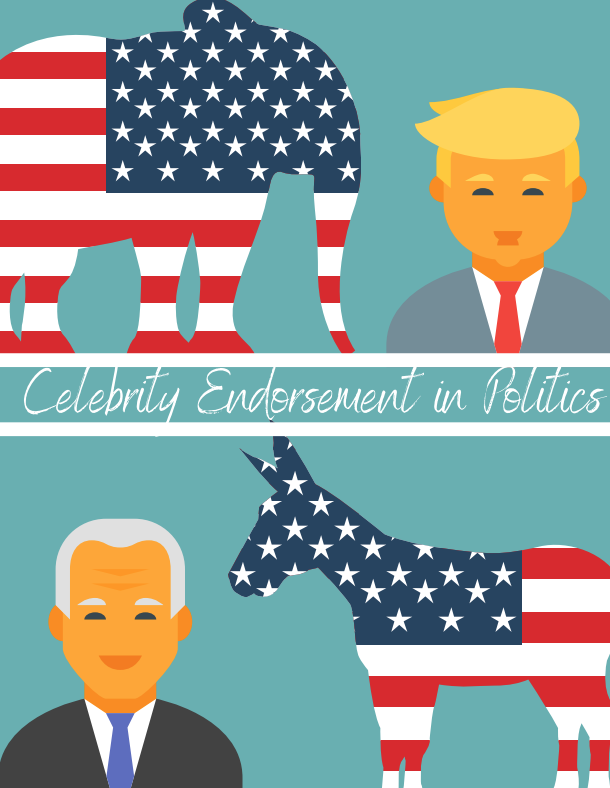 The 2020 presidential election caused an immense divide between the people of the United States. While everyday individuals dropped friends and family members over who they chose to vote for, many celebrities made their opinions clear without worrying about their fans’ reactions. Movie stars, rappers, reality T.V. stars and other celebrities alike chose to use their platform and make it clear who they voted for.

Some celebrities endorsed and publicly supported President Donald Trump, most notably among them being Lil Wayne and Lil Pump.

Lil Wayne made his vote clear as he posted a picture with Donald Trump Jr. on Oct. 29th, claiming that they had a “great meeting.” Lil Wayne also tweeted in support of Trump’s Platinum Plan.

Lil Pump also publicly endorsed Trump. He posted a photoshopped picture of him shaking hands with the president as well as a video in which he bashed President-Elect Joe Biden’s plans to raise taxes for those who make over $400,000. This backfired after Lil Pump became a internet meme after Trump mispronounced his name and called him “Little Pimp”

Both Lil Wayne and Lil Pump received hate for their political opinion and lost fans over it, while some fans expressed they believe they have a right to express their opinions.

“They don’t deserve hate for their opinions. Just because they’re famous doesn’t mean they shouldn’t be allowed to express their political opinions just like everyone else has been doing,” Lil Wayne fan and Palmetto senior Lucas Mendez said.

Biden remained the more popular candidate with the stars as Beyonce, Lebron James, Taylor Swift and many others urged their fans to go and vote for him.

Beyonce made her opinion clear Nov. 2, when she posted a boomerang on Instagram wearing a Biden/Harris 2020 mask. Her caption read “Come thru, Texas! #VOTE”

LeBron James has always been vocal in his opinions whether it be the presidential elections or other events of the world. James also endorsed Biden on Instagram with a post captioned, “One more day. Please vote!! We need EVERYTHING to change and it all starts tomorrow [Nov. 3rd]. #BidenHarris #MoreThanaVote.”

Taylor Swift made her vote clear by posting a picture of herself holding a plate of “Biden 2020” cookies on Oct. 7.  She also had an interview with V Magazine where she discussed why she was voting for Biden.

Some people question whether celebrities should be using their platforms to endorse certain politicians. Celebrities have the full right to do so under the U.S. Constitution, but the question remains among fans: should they be trying to influence their large, and often young, audiences?