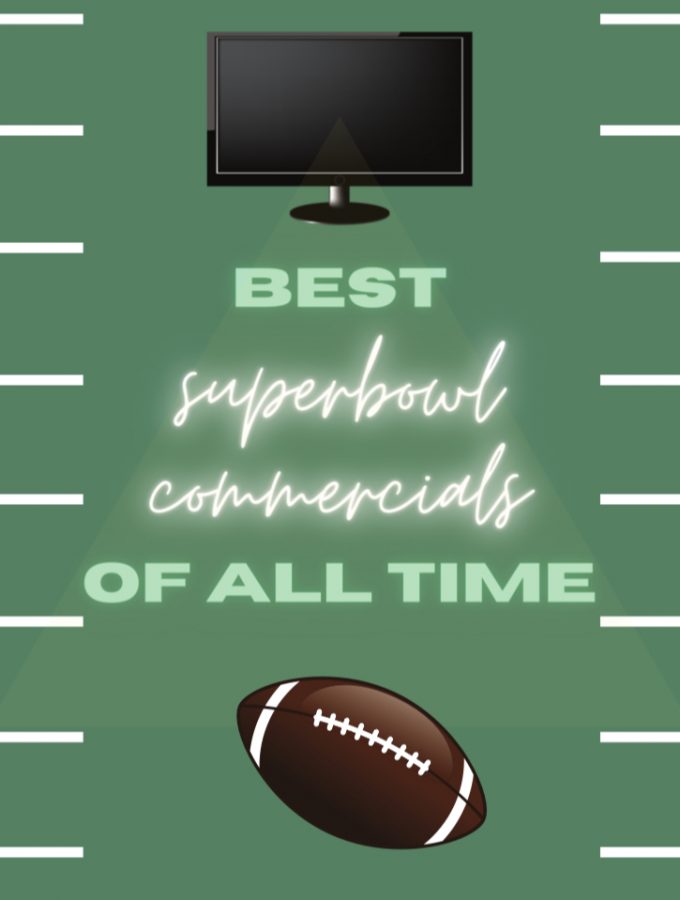 The Super Bowl: a three-and-a-half hour football game spent in front of the television eating chips and guac, yelling, cheering and, most importantly, watching great advertisements.

A tradition since 1967, the Super Bowl remains one of the most patriotic days for Americans. Families gather around the television to watch football, making it the most-broadcasted event each year. 99.9 million viewers tuned in to watch the Super Bowl in 2020, but that still does not beat the most-watched game from 2015, when a shocking 114.4 million viewers tuned in.

Personally, I watch the Super Bowl for the food, the halftime show and advertisements. I am not a big football fan, but I usually stay for the beginning and end of the game. Ironically, what I consider my biggest peeve because they interrupt what I am watching actually interests me the most on Super Bowl Sunday: the advertisements. Watching advertisements has actually become a sort of tradition in my family, with each family member sharing their favorite advertisement at the end of the night.

Companies compete to make the most entertaining commercials, and they go all out. In 1967, a Super Bowl advertisement cost $42,500; in comparison, in 2020, a 30-second commercial cost about $5.4 million. The Super Bowl offers the best opportunity to reach a large audience, explaining the high cost.

At the end of the night in 2013, this took the spot as my favorite advertisement of the night. Honestly, this ad still pops into my mind once in a while, and I am not mad about it. The $4 million advertisement features people in a library fighting over which part of the Oreo is better, the cookie or creme. The argument leads to the library eventually burning down. Personally, I prefer the Oreo’s cookie, but that is besides the point. Oreo even included their Instagram handle at the end of the advertisement to continue the discussion online. This promoted the company and ad on a whole new platform, keeping the idea fresh in every viewer’s mind.

Aired at the 1993 Super Bowl game, this advertisement features Michael Jordan playing a game of HORSE against Larry Bird for a McDonald’s Big Mac. Bird, who had recently retired, agreed to appear in the advertisement with Jordan, who announced his retirement that year. Both were major basketball stars who performed crazy trick shots for their chance to win a Big Mac. The infamous expression “nothing but net” used in the video continues today as a commonly said phrase. In 2010, McDonalds featured LeBron James and Dwight Howard in a reboot of the ad, and Bird made a guest appearance. Personally, the original is better. This advertisement had such an impact that other companies such as Nike used a similar advertisement style, with Nike’s version featuring Tiger Wood and Rory Mallory engaged in a similar competition.

In 1984, Apple aired this famous advertisement for the first and last time at the Super Bowl. The advertisement, based on George Orwell’s book “1984,” features a dystopian society meant to warn people about totalitarianism. The advertisement aired days before their new computer, a marketing technique which proved beneficial, as Apple stands as one of the most successful phone companies in the world. In the ad, a group of people with shaved heads in an auditorium look at a large screen displaying propaganda. Cutting between scenes, a woman in bright orange shorts with a sledgehammer runs from guards . The woman throws the sledgehammer at the screen, shattering it, and the advertisement ends with the famous line: “On January 24th, Apple Computer will introduce Macintosh. And you’ll see why 1984 won’t be like 1984.” The message conveys that the future of Apple technology would bring freedom, not control. Captivating the audience’s attention, many refer to the advertisement to this day.

Almost a Super Bowl regular, the famous “Avocados From Mexico” advertisements remain some of my favorites. In 2016, they released an advertisement featuring aliens taking a tour of Earth’s history and their greatest achievements. It shows the Rubiks Cube, “torture devices,”  airplane seats and the infamous white and gold dress that captured the Internet’s attention. The tour ends with Earth’s greatest achievement, guacamole. The aliens all eat it, and one even zaps a fellow alien because he double dips. This advertisement’s clever script poked fun at “normal” Earth activities, making it entertaining and relatable to the audience, as most families eat chips and guac on Super Bowl Sunday. This advertisement claimed a spot on my list that year as a quality ad, and the company lived up to their usual standard of great advertisements. Sadly, this year, they do not have an advertisement in the 2021 Super Bowl due to the COVID-19 pandemic.