Behind the Sparkle and Shine with Hayley Paige 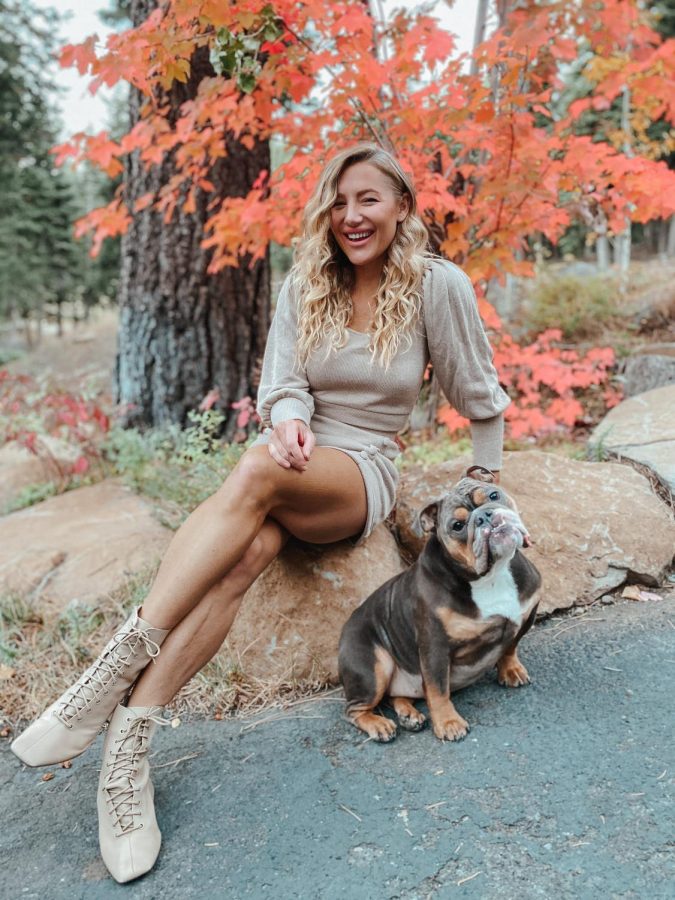 When deciding what career to pursue, many choose to go down the more conventional path rather than a more uncertain one. This was not the case for Hayley Paige Gutman, whose love of fashion and design propelled her to work as bridal couture designer at JLM Couture for the past decade. However, like any path less traveled, there may be some bumps along the way. On Dec. 17, 2020, Gutman resigned as a designer from JLM Couture after the fashion house sued her over the usage of her social media accounts.

Growing up in the Bay Area of California, Gutman always had an infatuation for the glittery things in life. Her grandmother taught her how to sew at a young age, which led Gutman to begin making her own clothing and even her own prom dress.

However, fashion was not the only thing on her mind. Gutman had a love for academics, specifically science and physics, as well as gymnastics. As a competitive gymnast, Gutman learned the importance of teamwork, a component which she attributes to her success as a designer.

“I was very much in an early mindset of accountability and leadership, but also being a part of a team. I think [teamwork] kind of helped me understand why it’s important to empower other women and not see them so much as competitors, but as people who can encourage you to be a better version of yourself,” Gutman said.

After graduating from high school, Gutman began attending Cornell University, where she majored in fiber science and apparel design. Originally planning to pursue a career in medicine and eventually become a doctor, she still felt drawn to fashion and design and saw the viability of the profession as a full-time career. Her varsity gymnastics coach at Cornell encouraged her to follow that passion and see where it would take her.

“My sophomore year, I was just so much more excited to go into the sewing lab than I was to study for organic chemistry tests,” Gutman said. “I think I just wrestled with the idea of, ‘Is it okay to really love what I do?’”

During her time at Cornell, Gutman received an internship at Elle Magazine in New York City and began to work under the direction of Nina Garcia, the Editor-in-Chief. Gutman contributes the expansion of her love for fashion and the behind-the-scenes of the industry to the internship, which helped her understand how to work with a team in a professional environment while still embracing her own personal style and individuality.

When it came time for her senior year at Cornell, Gutman participated in Cornell’s annual student-run fashion show and created a capsule collection of 10 wedding dresses. She had always been drawn to bridal couture and wanted to create a collection which showcased her talents in a distinctive way.

“I’ve always been attracted to the bridal industry because of the emotional attachment. I also think that so many special nuances in storytelling goes into the dress, and that is really what drove me to that category versus other areas of accessory design or apparel,” Gutman said.

While Gutman felt thrilled to make her own collection for the show, the experience of creating the dresses taught her a lot about her strengths and weaknesses as both a designer and garment maker. Little did she know that those dresses would bring her the opportunity of a lifetime.

“I ended up getting a job offer from a designer , sitting in the fashion show. Her daughter went to Cornell and it was something I never expected, and I am so grateful that it worked out that way because that is what led me to New York… I feel like it was serendipitous, in a way,” Gutman said.

Upon receiving her degree from Cornell, she made the trek to New York City’s Garment District and worked under the direction of Jill Stuart. During her time in the district, Gutman picked up a wealth of knowledge and learned about fabric sourcing, artwork, internal production and, most importantly, how to draw inspiration while staying true to her own voice and aesthetic.

Shortly after working for Stuart, Gutman began to work for Priscilla of Boston under the Melissa Sweet division, where she also designed bridesmaid dresses. One thing led to another, and she became a designer for a new collection with Marchesa Eterna bridal. During her shortened experience due to new opportunities, she visited Asia and got to work one-on-one with a design team, which furthered her love for teamwork in the fashion industry.

Curious as to what opportunities she could pursue, Gutman ended up finding JLM Couture and reached out to the fashion house. After a year, she received a response from the company, who interviewed her and offered an employee agreement in July 2011.

“I loved being a part of ‘Say Yes to the Dress,’ and it has definitely been something that has further connected me to the industry and Kleinfeld is amazing. I just think that they really love creating experiences and making women feel beautiful,” Gutman said. “I am really grateful that I always put my best foot forward and tried to show up authentically as myself.”

Gutman’s work as a designer for JLM Couture has come to a close, however, after the fashion house sued her on Dec. 15, 2020 over the usage of her @misshayleypaige social media accounts, and a judge granted JLM a temporary restraining order against Gutman. She subsequently resigned on Dec. 17, 2020, which came after long-standing conflicts between herself and JLM’s CEO Joseph Murphy, one of them in regards to the usage of Gutman’s social media.

“It’s important that you do the due diligence upfront and hire legal counsel where you can,” Gutman said. “Work with people that align with a lot of your morality and your business and, hopefully, by sharing my story, it makes a few other people just be more mindful.”

In Apr. 2012, Gutman joined Instagram and has repeatedly stated that there was no clause in her contract giving JLM control over the accounts, the kind of content posted or a specific posting schedule. Gutman created the account to simply share aspects of her personal life, like she had done since 2004 on Facebook.

“There wasn’t an expectation, there wasn’t somebody telling me to use it for business purposes. I was such an early adapter to it and I was working at JLM, but there was no correlation. There wasn’t anything in my contract about social media. I don’t think people really knew what it was going to be and there was no obligation to post or limitation on how I operated it or anything like that,” Gutman said.

Pinterest, another platform that Gutman has engaged with since 2014 and Tik Tok, a platform that she opened an account with in Nov. 2019, also fall under the category of accounts that Gutman states she did not have a responsibility to post specific brand-related content to.

“I have been running my account myself for eight and a half years and I always saw it as my account. I never had any obligation to post and I never had any type of control, or something that made me feel like I was doing anything wrong… I felt it was important to share my work with the world, and share my beautiful brides that I meet along the way,” Gutman said.

Throughout her time on social media, Gutman had retained full autonomy over her accounts and spent years cultivating a feed, sharing quotes and messages, personal anecdotes, life lessons and things about herself and her personal life. Due to the lawsuit and temporary restraining order, Gutman does not currently have possession of these posts.

Since resigning, Gutman has spent much of her time reflecting on her time at JLM Couture and the experiences she has had interacting with others through social media.

Gutman, who no longer has control over her social media accounts under the court-ordered TRO, noticed that a JLM Couture employee began to post on the account. This came without letting anyone know that Gutman was no longer in control or able to post or engage on her personal account without JLM’s permission.

“It felt like, again, a violation to a trust that was established with my followers and with that account and the public perception was very much that it was my account, and I felt like it was important to let people know the truth of what was going on and show that transparency,” Gutman said. “Delivering a message and being able to use my voice and freedom of speech within my legal limitation to let people know I wasn’t running the account and that I had resigned and give some context where it was needed felt like the right thing to do. It was scary to make that decision, but I’m very glad that at least I wasn’t afraid to use my voice.”

Currently, Gutman cannot refer to herself by her own birth name as well, nor can she use her name in a business context. This process has led her to believe that hiring a legal counsel to advocate for one’s best interest should remain a top priority for not only herself, but for others, too. She credits her optimism and support system throughout all of this as some of the things that have kept her going.

“I feel like mindset has been a big part of this and knowing at the end of the day, no matter what happens, there’s always a way and there’s always a will and certain things can never be taken away. Having a support system has been something I feel so grateful and blessed with and I am using that to keep my perspective, continue to fight as much as I can and prepare myself the best way I know how,” Gutman said.

One day, when all is said and done, Gutman hopes to return to work in her true passion in life, the fashion industry. She also acknowledges the blessings that this new chapter of her life has brought her and the world of possibilities that she has yet to explore.

“I’ve always been an anything-is-possible type of person. I do feel like the entrepreneurial pursuit, deep inside of my soul, has never really fully been satisfied and I do feel a sense of liberation in that there is an open vast horizon out there of exploration. There are certain things that just can’t be taken and I’m leading with that forward,” Gutman said. “I think change is good, so I’m going to embrace the change and try to lean into those optimistic thoughts as much as I can.”