More than just another player 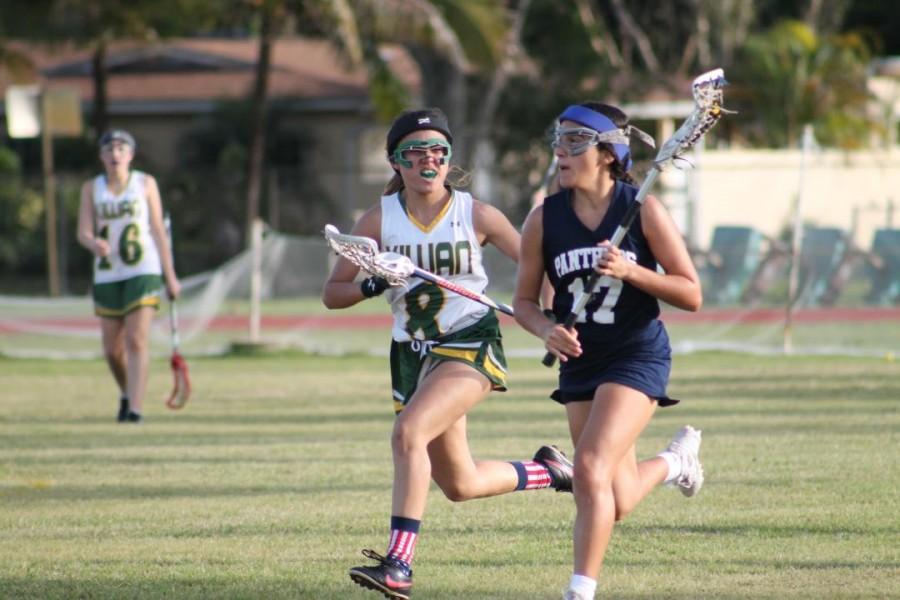 Dark and curly hair bounces behind the face of determination as senior Gabriela Fernandez-pla practices flinging her lacrosse stick, trying to perfect every aspect of her form. The routine continues year-round as her dreams of playing college lacrosse linger in the back of her head. Now an experienced player for Palmetto, she never imagined she could achieve so much.

Lacrosse tryouts at her middle school, Palmer Trinity, sparked her fervor for the sport. It was love at first sight. She made the team, consisting of a mere four girls, bought a stick at Sports Authority and began to enjoy the game without a sense of pressure.

The feeling stuck. She tried out for Palmetto’s team her sophomore year and made the team. The trek from novice to an experienced player, however, was rough. Her first year, she hardly played, causing frustration and dismay as she tried to make her way off of the bench.

“I knew I had it in me. I’m athletic, so I knew I could be as good as the other players, and during the summer I trained really hard and practiced basic skills,” Fernandez-pla said. “This year it paid off. Everybody tells me how much I’ve improved. It’s such a great feeling to be told that the work that you’ve done has paid off.”

Fernandez-pla partially attributes her success this season to her improved relationship with the team.

“I feel like this year the team is a lot closer,” Fernandez-pla said. “The seniors this year actually care about incorporating the underclassmen into what we do as a team and making sure that we all bond.”

One of her friends, Sofia O’Leary, has stuck by her side since before the two joined the lacrosse team. They became close friends at the beginning of Fernandez-pla’s junior year after meeting at a summer lacrosse club at Clemson University, and later discovered that they both attended Palmetto  by coincidence.

“We’re the jokesters,” Fernandez-pla said. “It’s easier for people to see who I am. If she wasn’t there, I wouldn’t act like that.”

The feelings are reciprocal.

“We can always make each other laugh,” O’Leary said. “We have such a similar sense of humor that even the smallest things will have us laughing for days. [And] she’s super encouraging.”

Her social life completes the other side of the lacrosse-driven girl seeking constant improvement. When she is not practicing or scoring in  games, she enjoys the company of her friends, whether it is during lunch or driving around on the weekends.

“She’s down for anything. She’s basically fearless,” senior Matthew Machado said. “I love how sweet she is. She never has bad intentions and never wants to hurt your feelings.”

The busy lifestyle that surrounds her with friends and teammates, however, requires some quiet time. At the end of the day, she finds that the most relaxing way to ease her mind of stress comes from the glowing screen of a laptop playing Netflix episodes of the sit-com “How I Met Your Mother.”

“I feel like if you have an outlet, it helps,” Fernandez-pla said.

Fernandez-pla releases her creative side on a regular basis through painting and detailed pen drawings–she cannot live without her micron fine-tip pens–by utilizing her artistic abilities in her AP art class and at home.

She met one of her closest friends, Lauren Lipsky, in art class during their sophomore year.

“We’re a good complement [to each other],” Lipsky said. “Almost every week we hang out, and we talk every day. We have a 150-day Snapchat streak, so we talk a lot.”

Their close relationship allows Fernandez-pla to be herself.

“She comes off quiet and shy, but when you really get to know her, she’s so much more,” Lipsky said. “She loves animals and is really passionate about many things, and I don’t think many people know that about her.”

Yet even with her favorite outlets and close relationships, college remains at the apex of Fernandez-pla’s priority list. Although her hopes of getting recruited by a college after her senior year recently dissolved, due to the short time she spent playing lacrosse in high school, she created a plan she believes will help her reach her goal of eventually playing college lacrosse. The inability to play next year  became insignificant as she now sets her sights on the future. She plans on training for two years while taking classes at Miami-Dade College in order to send videos of her heightened skills to coaches at various universities.

“[College lacrosse] is the most entertaining thing to me,” Fernandez-pla said. “Yesterday I watched a two-hour live game. I’m just entranced by what they do. It’s so beautiful and perfect and elegant, and I’m like, ‘Wow, I want to be like that one day.’”

Fernandez-pla continues to strive for a seat on a college team and those around her already notice her improvement.

“She has worked so hard with school and lacrosse,” Lipsky said. “It makes me more than happy to see her finally getting recognition for it.”