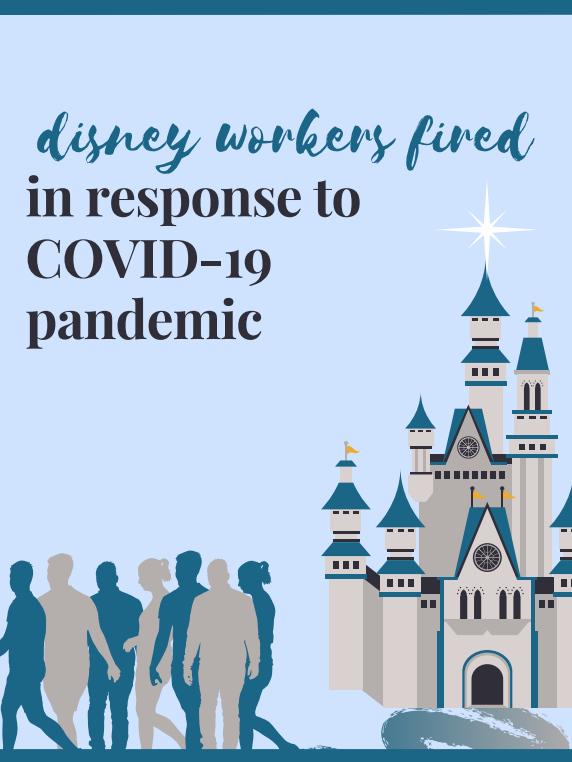 On Sept. 30, the Walt Disney Company announced that they would be laying off 28,000 employees in the United States.

The affected employees work in the different Disney theme parks, Disney Cruise Lines and Imagineering divisions. The company’s chairman, Josh D’Amaro, said that about 67% of these workers are hourly part-time workers, but full-time workers and executive staff will be affected too.

D’Amaro explained that the financial hardships created by the coronavirus pandemic caused this decision.

Disney Parks and Resorts brought in $26 million of the company’s revenue in 2019. With the closure of parks and resorts in the beginning of 2020, the company reported a loss of one  billion dollars and their profit fell 58%. Overall, the company’s profits dropped 91% in the first three months of 2020.

In addition, Disney’s executive chairman Bob Iger agreed to forgo his salary, while CEO Bob Chapek agreed to a 50% pay cut to help the company financially.

At the height of the pandemic in March, Disney Parks in California and Florida completely shutdown. Later, in April, the company furloughed 100,000 workers.

The company planned to open Disneyland in California on July 17, but due to the state’s strict guidelines, this was delayed indefinitely. In Florida, Walt Disney World reopened with the proper protocols and at reduced capacity in July.

Disney lost an estimated $500 million for every two weeks that the attractions were closed.

“They could not pay to have these employees work anymore and had to fire them,” Miami Palmetto Senior High School junior and Disney fan Jordyn Lazar said. “I think it was the right decision during this time, but I have a feeling they will be back soon.”

The ongoing spread of the coronavirus continues to raise concerns for park-goers and for the future of the company.

“I think that about half of Disney’s usual crowd will be eager to return while the other half is still hesitant to go,” Lazar said. “Although so many people are excited about returning, Disney will not make nearly as much as they did in the parks before COVID and during their busiest times like summer and holidays.”

The company expects to begin the layoffs of these 28,000 workers on Dec. 4.