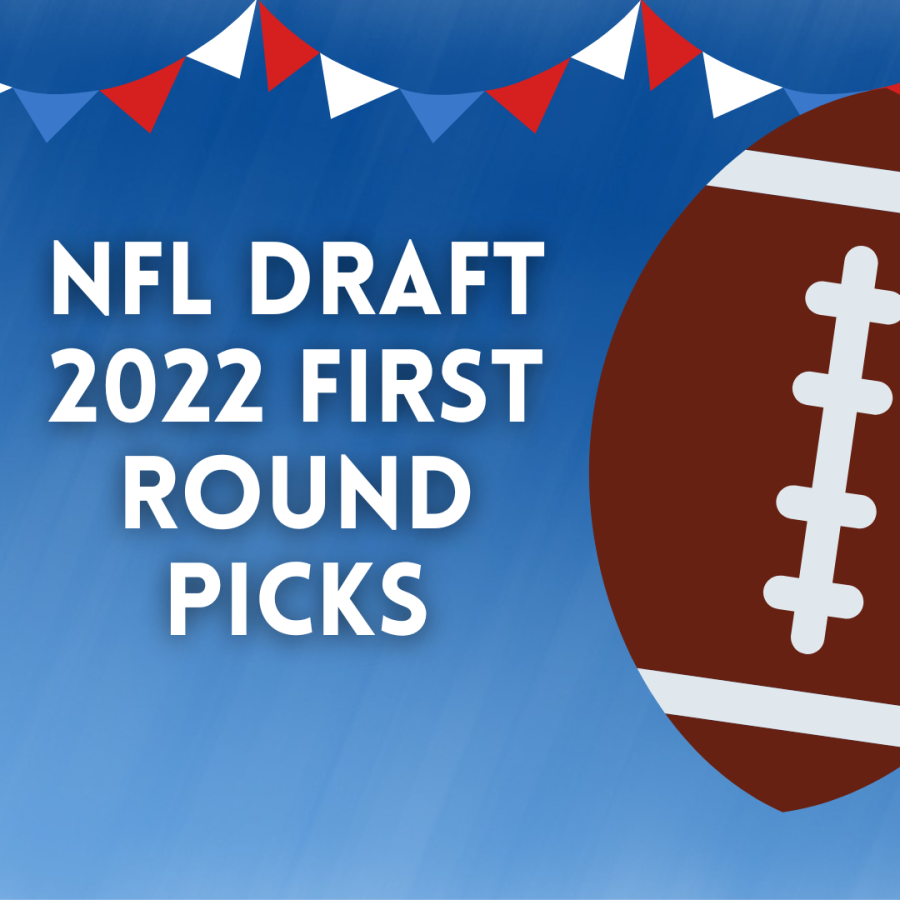 In late April of every year, general managers, owners and other team staff members come together to draft new players out of college, who they believe can make the biggest impact on their teams. This year’s National Football League draft was held from Apr. 28-30 in Las Vegas, home of the Raiders, and consisted of seven rounds. In the first round, which is recapped below, each team is allowed 32 picks.

Several teams this year traded away their draft picks, either for more late-round picks or for a star player, an example being the Miami Dolphins trading away their first two draft picks for Wide Receiver Tyreek Hill. Most years, there is a clear consensus as to who the first pick would be — in 2021 it was Clemson quarterback Trevor Lawrence. However, this year there was no consensus and Pick one was not declared until the draft began.

Listed are the abbreviations used for positions of players selected in the draft.

For their second consecutive year, the Jacksonville Jaguars had the first overall pick in the draft after finishing with a record of 3-14-0. The Jaguars’ 2021-22 season did not come without its difficulties, but the one thing that hurt them most was their pass-rushing ability. This pick gives them an instant change on the edges.

Aidan Hutchinson is the perfect pick for the Lions. The highest-ranked rusher and overall player in the draft class, Hutchinson attended the University of Michigan — where he was born and raised.

This was the first surprise pick from a team that had needs at every position in this year’s draft. Stingley, a graduate of Louisiana State University, was at one point the highest-ranked Cornerback in collegiate football.

Most people expected the Jets to choose a cornerback with Pick Four, and that is exactly what they did. For a team that struggled on the defensive side of the ball, Gardner was the only pick that made sense for the Jets this year.

Like the Lions and Jaguars, adding Thibodeaux to the roster allowed the Giants to boost their pass rushing. At one point, Thibodeaux was considered to be the best player in the country. Thibodeaux has tremendous upside, and will likely serve as an immense help to the team.

There was a chance the Carolina Panthers would select a quarterback, but instead went best available. The Panthers are a team that has needs at multiple positions, and the logical and safe choice was Ekwonu, the best lineman in college football and who will be huge for their run game.

The Giants already made a key addition with Thibodeaux, but it was clear that they needed help on the offensive side of the ball as well, after an underwhelming performance in 2021. Neal — considered to be the best pass protector in the nation — was highly regarded by Giants fans, who were ecstatic when the pick came in.

Former franchise Quarterback Matt Ryan was traded to Indianapolis, WR Calvin Ridley was suspended and WR Russell Gage signed a contract with the Buccaneers. There was a chance that the team would select a QB here, but wide receiver served as the safest choice.

For years, former franchise QB Russell Wilson advocated for the Seahawks to draft a player who could provide him with good pass protection. Now they have, only after Wilson was traded to the Denver Broncos. Cross is considered a top-tier lineman and will be helpful to the team.

After losing Jamison Crowder to the Buffalo Bills, the Jets decided to pick a weapon for Zach Wilson. Wilson and Chris Olave led Ohio State University to the status of a top-10 seeded team.

After re-signing Quarterback Jameis Winston — who was injured in 2021 —- it became clear that the Saints would either choose a lineman or receiver. They went with the dynamic Olave, who as previously mentioned, joined Garrett Wilson to lead Ohio State to a top receiving position in the nation.

With the previous addition of Hutchinson and now Jameson Williams, regarded as the nation’s best college receiver before he went down with an ACL injury, this pick will be an asset to the team.

Jordan Davis made some crucial plays for Georgia in 2021, despite having a down game in the college championship. Many thought the Eagles were going to select a receiver, but they traded for Titans WR AJ Brown instead. They added defensive line help, an area that is sufficient but aging for the team.

Most NFL fans found it surprising that Hamilton fell so low in this year’s draft. The Ravens took this opportunity without needing to trade to get the safety, who many thought was the most talented overall player.

The Texans immediately compensated for not drafting a lineman with Pick Three when they selected guard Kenyon Green. Green, who is from Texas and attended college at A&M University, is the perfect fit for a team trying to build around lineman Laremy Tunsil and quarterback Davis Mills.

The Commanders’ first pick with their new team name is receiver Jahan Dotson. The Commanders already have the talent of Terry McLaurin, and with Dotson’s addition, a strong receiving core can be expected.

The Chargers hit the jackpot last year, when they selected lineman Rashawn Slater, and hope to have the same luck with Zion Johnson, whose draft stock has soared in recent weeks.

After trading away AJ Brown to the Eagles, the Titans saw no option but to choose Burks. He provides fresh athleticism and size to a team that needs it.

Penning was one of the more underrated tackles in the draft class. After losing one of the best tackles in the league —Terron Armstead — to the Miami Dolphins, New Orleans did what they had to do to fulfill their needs.

In need of a Quarterback after legend Ben Roethlisberger’s retirement, the Steelers got one — the only one selected in round one. They hope he can shadow what Big Ben did not only on, but off the field as well.

The Chiefs, who were extremely close to another Super Bowl appearance in 2021, added defensive help with the addition of McDuffie. When they hit a skid early in the season, it was because they would later allow big plays on defense.

The Packers were a very good team last year, finishing as the National Football Conference one seed, but kept up their tradition of losing in the playoffs. They had to get better at stopping the run and hoped that selecting a Linebacker would help them do just that.

The Buffalo Bills managed to make a deep playoff run even without cornerback Tre’Davious White. They lost Levi Wallace to Pittsburgh and currently hope to get a superstar out of Elam.

The Bills lost two important linemen this offseason — La’el Collins to Cincinnati, and Connor Williams to Miami. This move was inevitable, and they hope to give Dak Prescott a brick wall yet again.

Tyler Linderbaum is considered the best Center in the class. The Ravens got a steal at 25 for a center who can be a cornerstone of a team’s pass and run protection.

The Jets made another great selection with Johnson, trading up to pick one of the best Edges in the draft. This move, alongside selecting Iowa State running back Breece Hall in the second round, is considered to be a steal that could potentially make the Jets contenders in coming years.

Officially the only Linebacker selected in the draft, Lloyd replaces Myles Jacks, the previous Jaguars’ Linebacker who was cut for salary concerns. They added Travon Walker earlier in the draft, and like many others, hope to bolster their pass rush.

As previously mentioned, run stoppers were a must for the Packers. Devonte Wyatt provides a big frame on the inside Defensive Line, a frame that Green Bay needs.

The Patriots lost star guard Ted Karras to the Cincinnati Bengals this offseason and added help in that position via the draft. Of all picks in the first round, this one drew the most criticism. Strange hopes to prove doubters wrong.

Karlaftis was originally expected to be a top-15 pick, but his stock plummeted after a  below-average performance at the scouting combine. Karlaftis can replace the veteran Melvin Ingram as the team’s star Edge.

While the American Football Conference champions were originally expected to pursue linemen in the draft, they picked three up in free agency and went for the best available player. Hill, alongside newly re-signed Jessie Bates, can provide Cincinnati with a reliable back secondary.

The Vikings originally had the twelfth pick in the draft, but traded down with divisional rival Detroit Lions. They were expected to draft a safety, but many had them selecting Kyle Hamilton if they had not traded down.