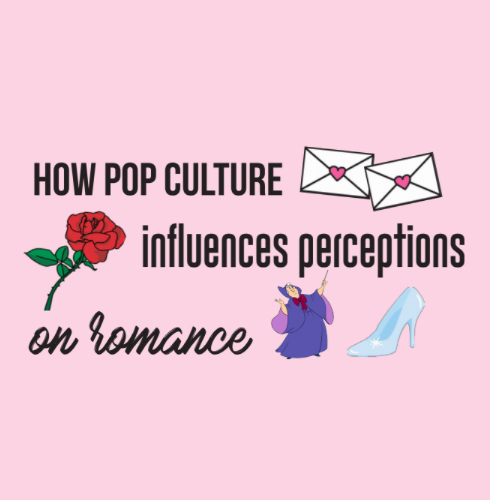 The media, and pop culture as a whole, loves love. Encompassing everything from the bliss of affection to the devastation of heartbreak, modern songs and films continue to focus on the universal emotion. The effects, however, remain contested.

In her junior year, senior and AP Psychology student Christa Riddlemoser looked into the effects of popular teenage films on those from ages 14 to 18. She used Seventeen Magazine to identify the most popular movies this age group watches, and cross referenced those choices with additional sources.

“I learned that teenagers believed that movies set a certain standard of popularity and expectation for their social life,” Riddlemoser said. “I surveyed teenagers in high school asking them tailored questions from my analysis to get their input on the subject.”

She identified some specific movies to research in depth, including “Pretty in Pink” and “To All the Boys I’ve Loved Before.”

The plot of the movie “Pretty in Pink” follows a common theme that seems to pervade the entire industry: one person deemed a social outcast finds love in a contrastingly popular, well-liked person. The same outcome occurs in “To All the Boys I’ve Loved Before,” in which a quiet girl’s personal love letters to her teenage crushes are exposed. The relationships created in each film serve as influential examples for audiences.

“The most common theme is fulfillment through relationships. For instance, ‘To All the Boys I Loved Before’ portrays Lara Jean constantly searching and idealizing love,” Riddlemoser said. “Throughout the movie, she idealizes the relationships she would have with different guys.”

This illusion of perfection does not entirely convince everyone, though.

“I think it just creates a false fantasy about relationships, and an unrealistic perception. I liked [the movie] because it made me feel good, but I still know that I can’t expect that in real life,” senior Camila Guerrero said.

According to Riddlemoser, these films also inspire a sense of dependability on a partner, placing emphasis on that necessity rather than remaining content with oneself.

“It gives teenagers the impression that before, their life without romance, is more empty and lonely. Then, when said romantic companion enters their life, they all of a sudden become happy and their life turns around.”

The general influence of pop culture on kids and young adults traces back to the relationship between observation and behavior. Psychologist Albert Bandura pioneered this research in the 1960s.

“Relating to Bandura’s work that children, in this case teenagers, learn behaviors through observation… this age group is still developing thought and impressionable minds,” Riddlemoser said. “These repetitive images and messages will eventually stick.”

Everything watched and listened to inspires a reaction from its consumers. Tackling an emotion as multifaceted and sheerly complex as love results in the same consequence — whether “healthy” for one’s image of relationships or not.