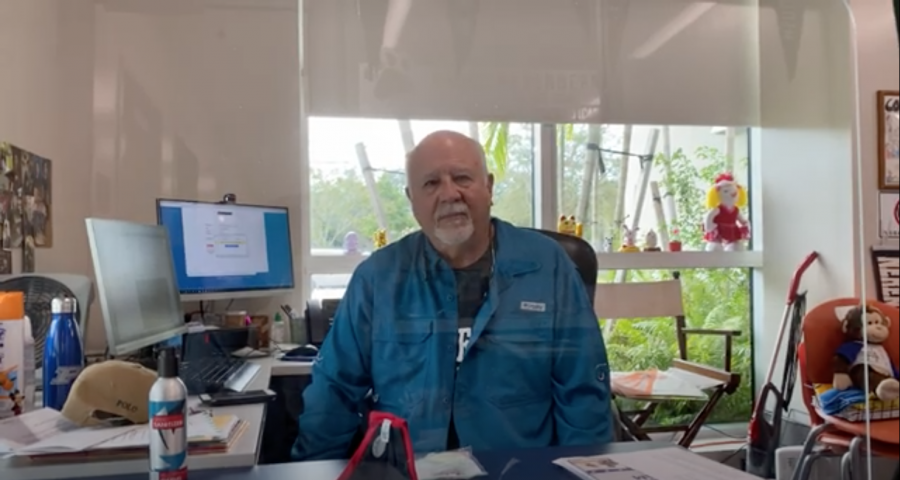 As the years go by, teachers must make the difficult decision of when to retire. This year, Harry Nerenberg, Miami Palmetto Senior High School’s college counselor, plans his retirement for the 2021-22 school year after counseling at Palmetto for several years.

Nerenberg has worked as a counselor at Palmetto since 2003. He previously worked as a teacher from 1976 to 1979 in Philadelphia. He left the job to pursue being a salesman for Gestetner Corporation in Philadelphia from 1979 to 1982. He sold printing machines to churches, schools and businesses for the company. He later realized he missed the students and the teaching atmosphere. Upon moving to Miami in 1982, he began teaching again.

Nerenberg took interest in working with at-risk students because he grew up as an at-risk kid in a low-income neighborhood in Philadelphia. He originally taught history and English as a Second Language at the John Robert Edward Lee Educational Center until 1995, working with students who had gotten expelled from Miami-Dade County Public Schools. Later on, he worked at South Dade High School as a counselor for six years. His career shifted to counseling when the counselor at JRE Lee continuously fell ill. Due to this, students would go talk to him instead since they felt like they could talk to him and that he could be trusted. The principal noticed this too, and asked him to cover for the counselor. After getting his start in counseling, he went on to become the head of South Dade’s Guidance Department. He loved his job but wished he could work at Palmetto.

“Every time I drove down 77th avenue, I kept saying, ‘why didn’t I get a job at Palmetto,’” Nerenberg said.

So, when a counseling job opened up at Palmetto, he leapt at the opportunity and transferred over. Throughout his years at Palmetto, watching his students graduate, (especially those who almost did not), became one of his favorite moments in his career.

“There’s nothing like watching a kid graduate who struggled,” Nerenberg said.

Students who asked him for help with their college essays brought him much joy. Later, when they needed to pick a college, students would come to him and ask him to help them decide which college to select. Moments like these made his job worthwhile.

“All of a sudden, this lightbulb goes on and they decide where they are going to go, and  it’s like marriage,” Nerenberg said.

Having a job as a counselor felt like a calling to Nerenberg. Nerenberg has loved and had an amazing experience working for the past 17 years as a college counselor at Palmetto, and the amount of students and teachers he has helped throughout his career is a testament to the amount of love and passion he puts into his job.